Despite its slow beginnings, the Polk County Library is one of the oldest continuously operated libraries in Arkansas. With its wide selection of magazines, encyclopedias, reference books, books on tape, and children’s, young adult and adult books the library is used by many people. The Polk County Library has been around for a long time, has gone through many changes, and has had a great impact on the citizens of Mena and the surrounding areas by helping in education and reading.

The library began in 1897, shortly after the founding of the town of Mena. The vision and pioneering efforts of the members of the Woman’s Literary Club and private citizens made the present-day library a reality. In 1900, after a book shower at the home of Mr. and Mrs. J.P. Landes, a library room was rented, with 40 books as the nucleus and our well-filled library of today is the result.

The land upon which the building was located was dedicated to the City of Mena by the Townsite Corporation for library purposes in 1896. The building, across Port Arthur from the City Park, was originally the main building of Old Central School, located on the lot where the First Baptist church now stands, and was acquired and moved by the Woman’s Literary Club in 1904. After some years of makeshift quarters and volunteer librarians, in the fall of 1905 the Mena Public Library opened its doors to the public in a modest white frame building.

Financing was accomplished through personal contributions, social money-raising effort and a contribution from the Kansas City Southern Railroad for $7.50 a month. From 1897 to 1965, the library was operated without public funds and was necessarily restricted in its service to the public.

In the November 1, 1964 general election, a one mill tax was approved by the voters and the library was converted into a county library. In 1965, after the tax was authorized, the City Council of Mena turned use of the land over to the County Library Board, and the Woman’s Literary Club transferred its ownership of the building to the County to use for library purposes.

In 1966 the library received a state-aid grant by the Arkansas Library Commission for $11,000 in new books. This raised the number of volumes on the shelves from 2,500 to 7,500 volumes of basic and valuable works. The library was then completely renovated and decorated and a full time librarian was secured, and a large and comprehensive selection of books was placed on the shelves. An important fringe benefit to the county was securing the bookmobile which called regularly to Polk County. The bookmobile allowed people to check out books that the library didn’t have. Readers could order several books from the Arkansas Regional Library and the bookmobile would deliver the books to the Polk County Library. They could keep the books for a couple of weeks then return the books to the bookmobile and order other books while only having to pay postage.

With the income from the one-mill tax and from contributions made to the library, the Library board was able to employ a full-time, qualified librarian, and to subscribe to other services which were helpful to Polk County’s patrons and to expand the services of the library to all citizens of the county.

On September 6, 1967, the City Council of Mena went on record as being in favor of the sale of 175 feet of the 300 x 180 foot tract of land facing Port Arthur that was the site of the then Polk County Public Library, to the Post Office Department for the sole purpose of building a post office in exchange for no less than $24,750. The money would then be held by the City of Mena to be expended for the sole and only purpose of building anew library on the remaining 125 feet, with the further provision the sale and conveyance of the tract be sanctioned and approved by the judgement of the Chancery Court of Polk County. 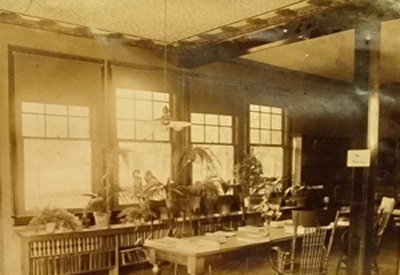 In 1970 the library began serving the visually and physically handicapped or people that could not read magazines or books in ordinary print with a “Talking Book” on phonograph. The recorded book was sent without charge by the Arkansas Rehabilitation Service for the Blind and they supplied specially built talking book machines to the library, also without charge.

In April 1970, the Mena Public Library Board was notified through the State Library Commission that the matching federal funds applied for to pay for sixty percent of the costs of the proposed new building was available. The grant was to be matched with forty percent from local services. That money was to come from the sale of a portion of the city-owned library lot and the only hold up was the then current slow-down on construction money on the federal level.

Architects drew up the plans for the new library building. It was to be modern in function and design, taking full advantage of natural lighting through clerestory windows. The 3,500 square feet building was expected to cost approximately $60,000, paid by government funds. Additional money, some $11,000, was allotted by the Arkansas Library Commission for equipment. Since the post office was not ready for bids, the council borrowed $12,500 from each of two Mena banks, The Union Bank and The First National Bank. This money was placed in a special library fund and represented the forty percent of the amount needed to receive federal aid, with the provision that the money would be paid immediately when the transaction came through. A problem arose when all the bids received were more than $7,000 over the estimated cost. They accepted the lowest bid and a decision was made and plans formulated for a public fund drive to raise over $7,000 in Polk County to assure that the original plans for the proposed new library building could be constructed without the curtailment of the quality of the facility. Some adjustments made were using tile instead of carpeting and cutting out asphalting of the parking area. Also, a Telethon was conducted to raise money to help in the cost of building the new facility. The amount of $8,079 was collected, allowing the library to be built according to original specifications. The extra money was used to have carpeting in some floor areas rather than having a tile floor throughout.

The Arkansas Library Commission, in July 1970, made a special grant of state aid to the library for the purpose of furniture and equipment which would be needed for the new building. The new building was constructed without moving the existing library. The floor plans also allowed for future growth. The structure was to be centrally heated and air conditioned with the main entrances facing Eighth Street to allow for less traffic congestion, better parking, and a level entry into the building.

September 29, 1970 was the date when the contract for construction was signed by the architectural firm of Environmental Design, Inc., Little Rock, and Structural Systems, Inc., Fort Smith. They explained that their bid was so much over estimated cost because of the higher cost of subcontracting here in Polk County. They said that the same building could be built in Fort Smith for the budgeted cost. Work began in October of that year and every effort was made to save as many trees as possible.

The new building was completed in April and an open house was held on August 23, 1971. The entrance hallway featured built-in, glass-fronted cases that were used to display a wide variety of interesting collections. The library was well-stocked with reading material, fiction and non-fiction books, documented data, encyclopedias and research books as well as a historical shelf and a large children’s section.

A painting donated to the City of Mena that had been believed to be lost, turned up at the library. The painting, entitled “Amsterdam Cupids,” was sent by Mine de Geoin of Holland. She had sent the painting in appreciation of the town of Mena being named after her. Her husband, an entrepreneur named J de Geoin, was a financial backer of the railroad that was built through Mena.

The Polk County Library is the only stationary library unit within Polk County. As the only stationary library, the County Library serves as a backup source for school systems at Mena, Cossatot River and Ouachita River. In addition, it is the library for small religious schools in the Mena area. The library also serves students from Montgomery County and Eastern Oklahoma. In 1983 a new clientele was added when the community college was grafted onto the local vocational-technical school. With all of these area schools using the library there was a heavy pressure on the public library as a backup source for course-work materials for students. The study area at the Polk County Library was inadequate to handle the growth of student usage. Over the years the shelving holding the books expanded until it occupied most of the floor space. Due to the space limitations, teachers ceased bringing complete classes to the library. The main functions of the Summer Reading Club were moved to churches, and story hours for head-starters and other large pre-school programs given by the library staff had to be conducted at their locations.

By January 1989 the Polk County Library Board determined that the only practical way of pursuing its goal of increasing in-library service to the community would be through adding a multi-purpose room that could be study space most of the time, but still be utilized for story hours and other programs to bring children and adults into the library at other times.

The architects, Arnold and Stacks, started on the library addition in May 1992, and were finished on October 31, 1992. The total cost was $167,500. The multi-purpose room contains 1225 square feet. There is also a Special Collections Room for the library’s extensive genealogy and local history holdings with the micro-film machines. The expansion also provided a small storage room for back issues of periodicals, materials awaiting processing, audio-visual equipment and meeting room chairs. The combined building has contributed toward strengthening the statewide library system through adequate facilities, furnishings, and equipment and has properly housed and supported libraries across the state.

The library currently provide a computerized-card catalog and staff are able to check books in and out through the computer. The library also provides computers for public use.

As an outgrowth of one of the four oldest public libraries in Arkansas, the Polk County Library has gone through many changes. From its start in one rented room with forty books to a 5,914 square foot brick building with over 20,000 books, the library has helped many people and continues to provide a valued service to the area.

From people needing to research a topic or just wanting reading enjoyment, the library is the place to go.